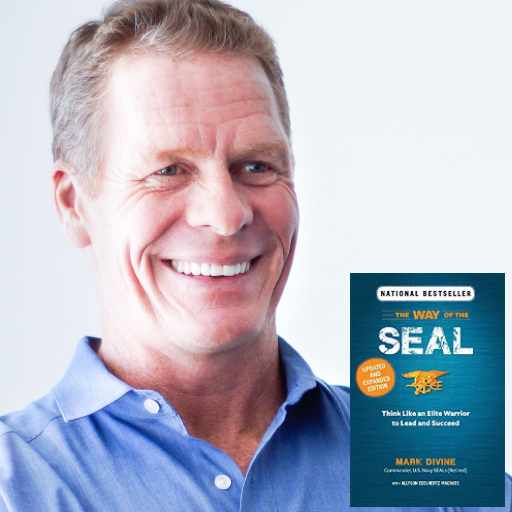 AUTHOR of The Way of the SEAL: Think Like An Elite Warrior to Lead and Succeed

Most people think mental toughness when they imagine a Navy SEAL.  What they don’t expect is the thoughtful, yoga-innovating, joking and laughing, professor of leadership named Mark Divine.

At twenty-six he graduated as Honor Man (#1-ranked trainee) of SEAL BUD/S class number 170. Mark served for nine years total on active duty and eleven as a Reserve SEAL, retiring as Commander in 2011.  His leadership of teams was so effective the government tasked him with creating a nationwide mentoring program for SEAL trainees.  Not only did it increase the quality of SEAL candidates, it reduced BUD/S attrition rate up to five percent.

A New Kind of Fitness Company

What made Mark’s program so effective was his focus on more than just physical fitness.  He’d seen laughter conquer fatigue and bond teams at their BUD/S breaking point, intuition save his men during the hell of war and special ops missions.  He knew he could form a fitness company that prepared civilians for the physical AND mental/emotional demands of  Navy SEAL-like lifestyle.  So he started SEALFIT.

At the same time SEALFIT was beginning he co-founded Coronado Brewing Company, built www.NavySEALs.com, the leading website for SEAL gear and information, and launched US Tactical, a government contracting business.  He also served as adjunct professor of leadership at the University of San Diego before the Navy called him up for duty in the Iraq War.

Through Mark’s teaching, entrepreneurial endeavors and travel to foreign countries, he noticed the power of mental toughness, emotional resilience, intuitive leadership and a healthy spirit for anyone wanting breakthrough performance.  They weren’t solely for combat or restricted to the business world or one culture.  He’d watch them transform lives in people from every background, nation and belief system.  So he wrote and self-published his first book, Unbeatable Mind, in 2011 and launched its at-home study program.

More Writing and a Continuing Journey

Three more books poured out in a torrent…  The Way of the SEAL, published by Reader’s Digest, and 8 Weeks to SEALFIT and KOKORO Yoga, both published by St. Martin’s Press.  Writing his experience for others triggered a realization of his own full-circle journey…

Grown up in upstate New York, a degree in economics and an MBA from NYU.  He’d prepared for life as a high powered CPA… and then left his high paying finance career for the adventurous life of a Navy SEAL officer.  Now he’s once again sought after by those same corporations and institutions, as a trainer of the mental toughness and the whole person training that shaped, and healed him.

Mark lives with his family in Encinitas, California, where he continues to train, explore, learn from others and generate more resources to improve the lives of everyone he meets.