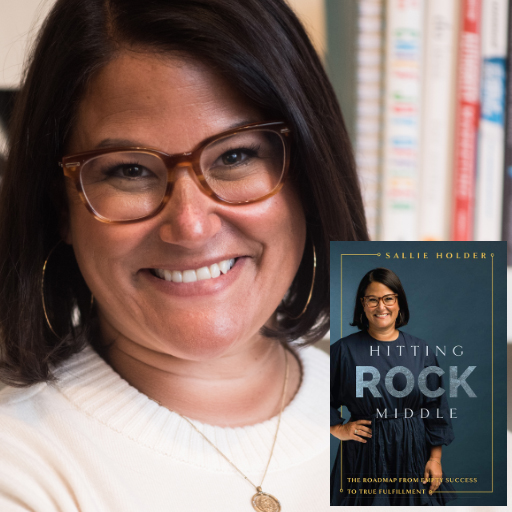 AUTHOR of  Hitting Rock Middle: The Roadmap From Empty Success To True Fulfillment

I know the struggles of being in Rock Middle – being externally successful while feeling internally dissatisfied, unfulfilled, and paralyzed from making a change. I lived in that place for years & believed success simply didn’t include fulfillment. Now I know – that’s just not true!

Achieving a higher level of success while feeling fulfilled is absolutely possible using the framework I’ve developed. Now it’s my mission to share this framework with more people to help them reach their greatest potential.

As a nationally-recognized public speaker and business coach, Sallie Holder has spent more than fifteen years helping businesses, entrepreneurs, and employees identify what’s getting in their way and then breaking down those barriers to success. Sallie earned a degree in Human and Organizational Development from Vanderbilt University and followed that by earning her law degree. While spending more than ten years practicing labor and employment law, advising small companies as well as giants like FedEx and Michelin, she grew passionate about the growth of businesses. Moving beyond her law practice, she became an entrepreneur, starting her own business in coaching. Here she discovered her true passion: helping others make the bold choices that lead to lasting success and happiness.

Her work – whether one-on-one, in group workshops, or at speaking events – helps people bridge the gap between where they are now and where they are capable of going when they reach their true potential. Sallie fundamentally believes that work doesn’t have to be hard, and everyone deserves to love what they do!

Sallie has delivered 100’s of speeches, workshops and breakout sessions to audiences throughout the country. She gives every audience a speech tailored to fit their specific needs, filled with both inspiration and tactical action steps to achieve their goals. She speaks on entrepreneurship, team building, leadership and change management. Audiences continuously give Sallie rave reviews, saying she is “authentic” and gives clear direction so that anyone can immediately implement her tools to create lasting change. Sallie brings a contagious positive energy to her audiences. There’s no doubt your audience will connect with her and leave feeling excited about what they’ve learned.

It makes sense why so many audiences connect with Sallie’s message. She’s been in their shoes. She’s created the change she inspires her audience to achieve, and walks clients through the same process daily. She’s filled with real life stories of what is possible when you push past fear and create change, and she’s able to share those stories so that everyone can walk away with relatable insights and lessons