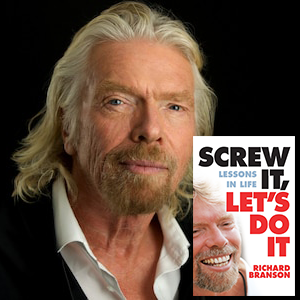 AUTHOR of Screw It. Let’s Do It.

Sir Richard Branson is most widely known as the founder of the Virgin Group, a conglomerate of more than 400 companies and one of the most dynamic global brands. Branson credits “fun” as his guiding principle and has made several attempts to break world records and is a bestselling author of a dozen books, including <I>Screw it, Just do it.</I> He is also noted for his humanitarian initiatives; the next 10 years of profits from his transportation empire (expected to reach $3 billion) to developing renewable alternatives to carbon fuels.

After quitting school at 16, Branson moved back to London where he began his first successful business. He started a magazine about youth culture, called The Student. It was produced by students, for students and was launched in 1966. Branson was able to attract significant advertisement from firms wishing to tap the student market; this enabled him to distribute the first 50,000 copies for free.

In the 1960s, Branson set up a mail-order record company called Virgin to complement the student magazine. With modest profits from his magazine and mail-order business, he was able to get a record shop on Oxford Street, London. Undercutting other High Street retailers, Virgin Records experienced good growth.

As the record business expanded, Branson created his own record label with Nik Powell – Virgin Music in 1972. Within a year, Branson had a great stroke of luck. His first artist, Mike Oldfield, recorded the album ‘Tubular Bells’ and this proved a smash hit, staying in the charts for over four years. This high profile and earnings helped Branson to sign up some of the top bands of the era, including Culture Club, the Rolling Stones, Genesis, and controversial bands such as the Sex Pistols.

In 1984, Branson branched out into his biggest business venture – forming Virgin Atlantic Airways, and he started competing in a market dominated by big national carriers, such as British Airways.

Other big business ventures of the Virgin group include – Virgin Mobile in 1999 and entering into British railways with Virgin Trains in 1993. In 2007, he created Virgin Money.