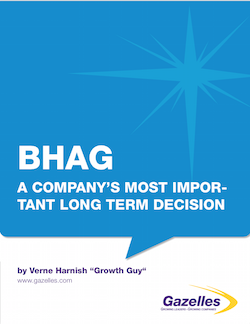 In an increasingly global economy, anyone with a laptop can become your company’s rival overnight, so it’s more important than ever to find a way to separate yourself from the pack. Viewing your market through a different lens than your competitors is an essential step in achieving a differentiated vision.

Doing this requires you to answer two strategic questions: (1) What is powering your economic engine? You need to identify the single overarching Key Performance Indicator (KPI) that Jim Collins calls the “Profit/X.” It defines the essence of your business model. (2) Does your Big Hairy Audacious Goal (BHAG), a term Jim Collins and Jerry Porras trademarked to represent a company’s 10- to 25- year goal, align with this measure of your economic engine?

LISTEN TO CUSTOMERS FOR CLUES

Serial entrepreneur Alan Rudy knew the importance of finding a different way to approach a market when he invested in Perceptionist, a Columbus, Ohio-based call center that was serving 60 to 70 different types of companies. At the time, it was looking at its industry the same way as everyone else and was focused on trying to achieve a higher profit per minute. To figure out how to differentiate and grow the company, Rudy spent three months on the road visiting customers.

During one of these meetings, a customer began grousing about having to pay monthly rates equivalent to about $1 per minute to have calls answered, especially when someone had dialed a wrong number. The customer also waxed on about the problems of playing phone tag with customers, who just wanted to make an appointment. In his frustration, he exclaimed to Rudy, “Forget the buck per minute, I’d pay you $25 to take over my calendar and book appointments!”

A light bulb went off. Rudy knew where he needed to take the company. He sold off accounts that needed only answering services (including ours at Gazelles!) to a competitor and shifted the company’s focus to achieving a target “profit per booked appointment.” This turned around a situation in which Perceptionist had been struggling to compete with overseas rivals that could offer rates equivalent to 50 cents a minute. Focusing on the new metric and a handful of targeted industries that needed appointments booked changed the fundamental economic engine of the company – and helped it bring in revenues of $5 a minute.

Rudy eventually sold his stake in the company back to the original owner and says it is now doing well – with a single minded goal of booking as many appointments as possible. Meanwhile, he tripled the value of his investment in the firm.

Rudy changed the fundamental economic engine of the company, the Profit/X, and it paid off. This metric is valuable because it provides the leaders with a single KPI they can track maniacally to monitor the progress of the business, a great luxury to have. Though the numerator can be any metric you choose – profit, revenue, gross margin, pilots, routes, etc. – the denominator is fixed and represents your company’s unique approach to scaling the business.

Southwest Airlines offers a good example. Most airlines focus on profit/mile or profit/seat. Focusing on the big expensive hunks of metal it flies around, Southwest instead laser focuses on maximizing profit per plane. That drives the rest of its strategic and tactical decisions.

It’s also critical that you set the right BHAG. Many companies make the mistake of pulling a random number or statement of aspiration out of thin air. The trouble is when it has no real connection to the company’s underlying strategy.

There has to be tight alignment between your Profit Per X and BHAG. In fact, your BHAG should be measured in the same units as the X. Southwest Airlines, for example, set a goal in 2000 to have a certain number of planes in the air by 2010. For Perceptionist, long-term goals were all related to booking as many appointments for clients as the company could – which aligned nicely with the needs of its niche of customers.

Naomi Simson, founder of the fast-growing firm RedBalloon – a marketplace of more than 2,000 interesting experiences like hot air balloon rides that can be given as gifts – set a 10 year BHAG for her company in 2005 to sell 2 million of them. As the column was going to press, RedBalloon was on track to reach that goal two years early. And the company’s BHAG has aligned perfectly with its tracking of “profit per experience,” something that Simson’s team maximizes through negotiations with contractors.

Again, it’s this specific focus of driving the business around a key unit – planes, booked appointments, experiences – and then making your long term goal some aspirational number of these units – that makes for a simple, cohesive and powerful vision for 2014 and beyond.