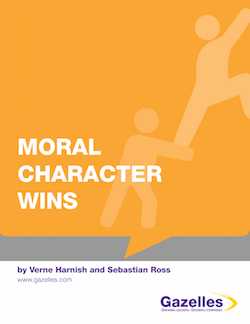 Companies that build teams with strong moral character win. Their teams are happier, perform better and are more successful overall.

This bold claim stems from the work of Jim Loehr, renowned performance psychologist and author of the book The Only Way to Win. Loehr´s research, which in part is based on his experience taking 16 world class athletes to number one in their sport and working with thousands of “corporate athletes,” shows that the satisfaction we get from achieving extrinsic accomplishments (number one in tennis, a new job, winning a deal, building a company) is mostly shallow and fleeting. Instead, what gives us a long lasting feeling of fulfillment and happiness is having practiced character strengths in the pursuit of these goals.

Performance strengths are great to have and necessary for most kinds of extrinsic accomplishments. Kenneth Lay, Bernie Madoff and Lance Armstrong have lots of them. But their lives became huge public failures because they lacked critical moral strengths. “To live a truly successful life […] one must have a solid number of moral character strengths. These are not negotiable,” writes Loehr.

To test his own theory thoroughly, Loehr founded a junior tennis academy at his Human Performance Institute recently. On their first day, the students hear: “We care about your tennis but care more about who you become because of tennis. Our most important imperative at this academy is winning with character.”

Working from a list of moral strengths, the students are required to journal about lessons learned that day, on and off the court. Not surprisingly, this has helped their performance. All 15 students going through the program are currently nationally ranked.

What Loehr has learned works in business, as well. Recent research suggests that companies that hold high moral standards clearly outperform general business indexes. For example, companies that made the Fortune list of the 100 Best Companies To Work For, a recognition based on factors such as trust, respect and camaraderie, produced between 1998 and 2009 annualized returns three times better than the S&P 500, according to the Great Place To Work Institute. A similar level of performance can be observed in “ethical” companies like the ones identified by the Ethisphere Institute or the “Firms of Endearment” described by Raj Sisodia in the book by the same name. Granted, these companies are not only successful because they foster moral character strengths among their employees. But ethical, fair and respectful treatment of all stakeholders is a common trait and recipe for success for companies that come out on top in these rankings.

THE TRANSFORMATION NEEDS TO START AT THE TOP

Leading ourselves is the greatest challenge we face as leaders. Only if we grow and develop as human beings can our companies flourish. Personal growth of the leader often becomes a condition for the growth of a company, as John Mackey, co-founder of Whole Foods, describes in his book Conscious Capitalism, where he describes his own story.

But “conscious leaders” don’t focus only on their own personal development. They also seize the unique opportunity to serve those they lead and help them become the best version of themselves.

After the tragic loss of his wife, Jay Steinfeld, founder and CEO of Blinds.com, reached such a turning point. “My future really began to take shape only when I began to define my success as being in the act of continuous improvement and improving the lives of others around me,” he recalls.

Realizing, as he put it, that he was “an overly burdensome micromanager, always finding fault in others,” he concentrated on identifying and recognizing the successes of his team. As he became more empathetic, his team relaxed – and performed better. To help his employees to stick with their own self- improvement goals, he put up a white board where individuals could share such commitments.

As the company has grown increasingly successful – it is now the world’s largest nline retailer for window blinds and shades, with $120 million in annual revenue and 180 employees – Seinfeld has tried to help his team stay true to its humble beginnings. He personally brings new recruits to a run – down alleyway in Houston where the thriving company had its first office back in 1996. There, he shares the history and core values of the company. He even built a reproduction of the alleyway at the company’s new offices.

“This way, we keep our humble history fresh in our minds and it also reinforces our core value ´Help People Achieve What They Never Thought They Could,’ ” he explains.

Consider how you can use your company as a vehicle for building your own character strengths and those of your team. In the same way you bring core values alive, moral character strengths pick up “grip” in your organization through processes and systems (even artifacts like Blind.com’s recreated alleyway) that reinforce the desired behaviors in training and day-to-day operations.

Boston Centerless, a manufacturer of ground bars and grinding services, recently completed its first eight-month leadership program in which character building, not skill building was the focus of the curriculum. Participants developed very specific plans about who they want to be and what kind of change they want to create in their behavior.

Company policies that support ethical behavior can achieve similar results. Zappos for example prohibits its purchasing agents to accept meal invitations from suppliers. Instead the company makes it mandatory to invite the suppliers on behalf of Zappos. It is a simple way of integrating character strengths like integrity, respect and generosity in a straightforward operational procedure.

Martin Seligman, the father of Positive Psychology, suggests a simple but effective journaling routine: Every night, write down three things that went well that day and why they went well. Reflecting about the why helps the writer to identify personal patterns of success and highlights how moral character strengths make good things happen in business and in life.

Andre Agassi shares in his memoirs how writing down his goals every morning and his plan for achieving them that day helped him gain that “steely resolve” that brought him back to the #1 spot in world tennis. “After putting them on paper, saying them out a loud, I also say aloud: `No shortcuts.’”

Striving for external achievements is vital for a fulfilling life. The point is not to pursue such goals for their own sake, but use them as means to help us become the person we really want to be.

Agassi’s reinvention of himself – from an obnoxious player who became number one but hated his fame and wealth and at one point battled drug addiction – to “the compassionate, generous, thoughtful and humble person he is today,” as Jim Loehr puts it, shows how moral character development ultimately supports performance. When Agassi focused on improving himself as a person, he came back as number one and was happier.

Leaders should proactively embrace this duality also in a corporate setting. At Next Jump – a New York City based e-commerce Company that runs employee reward programs for 70% of the Fortune 1,000 companies – to be considered a successyou need to combine extrinsic achievements with intrinsic moral character strengths.

“Making your father and your mother proud” is how the company metaphorically defines success, representing most parent’s desire for their children to be accomplished and considered a good person.

The highest recognition you can receive as an employee at Next Jump is the Avenger Award. The award recognizes the employee who most helped others succeed by caring for and serving those around her. In line with the company’s definition of success, the winner of the Avenger Award receives $30,000 in prize money, but must spend the amount to rent a house and fly in her mother, father and other loved ones to spend a week-long family vacation with all expenses paid.

IT NEEDS TO BE AUTHENTIC

The common thread among each of the companies we have profiled is the sincerity of their CEOs. They support employees’ personal development because they care about this, not because they are looking for superior long-term financial results. If your desire to help your team is equally heartfelt, you will be surprised at the results of your efforts.